I love jerky, but I certainly don’t love paying exorbitant prices for it! You can pay $20 per pound and more for packaged, store-bought jerky. Unbelievable!

I’ve made jerky before, but it has been quite some time. Since I was craving the stuff, I decided to dive in and make a batch using my Excalibur dehydrator. I went to my old standby—AllRecipes.com—and soon found a jerky recipe that sounded great: Sweet, Hot, and Spicy!

I ran to the grocery store to pick up a few items I don’t usually have on hand, like pineapple juice, Liquid Smoke, and Terriyaki Sauce, along with a nice, lean 1-1/2 pound top round sirloin steak. Returning home, I tossed the beef into the freezer and began mixing up the marinade according to instructions…it smelled wonderful.

I gave the beef two hours in the freezer to firm up and make slicing much easier—an appreciated tip from an All Recipes reviewer. I cut the meat against the grain into 3/16″ slices and tossed it into a gallon-size ziplock bag, followed by the marinade. I mixed it all together well and placed the bag into the refrigerator to do it’s magic overnight.

By mid-morning the next day the meat had been marinading 18 hours, which I thought would give it plenty of time to soak the flavor into the beef. Using a colander, I drained the liquid off the meat, then spread the cut strips out on paper towels to remove as much liquid as possible.

The pound and one-half of steak strips were placed on three dehydrator trays, being careful to leave space between the pieces, as shown below, for better drying. Thankfully, I placed the dehydrator in the basement during the drying process, since the wonderful aroma of the marinade filled the basement, rather than the kitchen and living room!

After 5-1/2 hours at about 160 degrees, I felt the beef was dried properly, so I turned off the dehydrator and removed the trays of jerky to cool. After a few minutes, a taste test was performed and the jerky passed with flying colors (see photo, below). 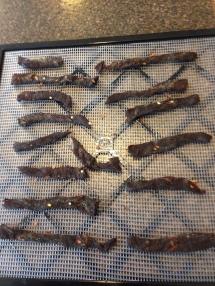 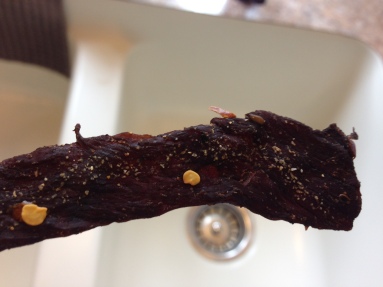 After further review—it’s important to eat enough to make a fair judgement 😉 —I’d say next time I’ll reduce the “sweet” ingredients a bit, while increasing the hot and spicy flavors some. Also, I must be honest in reporting I could have taken the jerky out of the dehydrator a half-hour sooner. It’s still very good, but just a bit too dry in my opinion.

I vacuum-sealed about one-third of the batch, placed another third in a zip-lock bag and that in a Mason jar with cover seal, then put the balance in the freezer to see how that comes out in a month or so. All in all, I’m quite pleased with the results and will now have jerky to enjoy for a few weeks or so.

Words and Pictures from the Middle East & Balkans

Not all who wander are lost ~ J.R.R. Tolkien

Not all who wander are lost ~ J.R.R. Tolkien

WordPress News — Free as in Beer.

Pursuits in the open air